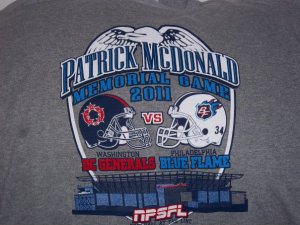 I felt pretty honored to be a part of such a awesome memorial for a fallen brother. Its a sobering experience to know that just a few short seasons ago Patrick McDonald was playing fullback for the Flames and then he was gone. The brothers in Philly did a great job of remembering him and honoring his family. To read more about Officer McDonald and his sacrifice CLICK HERE 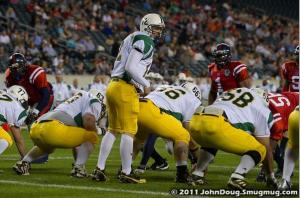 Saturday, April 30th, the DC Generals boarded a bus and made the short trip North to Philadelphia to take on the Blue Flame in the Officer Patrick McDonald Memorial Game at Lincoln Financial Field. Officer McDonald, a former fullback for the Blue Flame, was killed in the line of duty September 23rd, 2008 by an armed suspect during a traffic stop. The games festivities included the honorary coin toss by McDonald’s mother, as the remainder of the family looked on. It was an emotional event for both teams and the men came out hitting. From the first snap the 2 teams gave the crowd what they came for, hard hitting NPSFL action. The Blue Flame got out to an early 12 – 0 lead but the Generals kept fighting, scoring 6 in the early parts of the second half to bring the score to 12-6. Both teams played their heart out in the name of charity, and in the end, it was Philadelphia that came out on top, 12-6, another very close but tough loss for the DC Generals.

The Generals next game is at home on May 14th at 6pm, George Mason High School.

Posted on April 30, 2011, in DC Generals Football. Bookmark the permalink. Leave a comment.