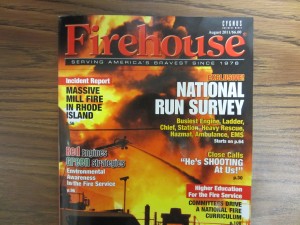 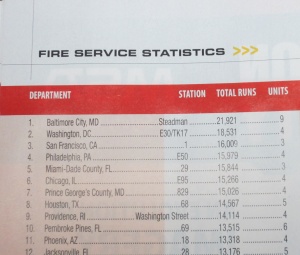 The 30th year of the National Run Survey from Firehouse Magazine highlights many categories within the fire service including busiest Engine, Ladder, Rescue Squad and more. Departments from around the country submit their run totals to be ranked among their peers across the US and Canada. Only the top unit in each class from each department is included in the results listing published in the August issue of Firehouse Magazine. The District of Columbia made a strong showing again this year and the members of “The Heights” are proud to announce their inclusion in the fabled “list”. For the year 2010, Truck Company 17 was the 2nd busiest ladder company in the Nation, responding to assist the citizens of the “East End” 4,496 times last year. “The Heights” complement of Engine 30, Truck 17, Ambulance 30 and Medic 30 again took honors as the 2nd busiest station in the Nation with the 4 units recording a total of 18,531 responses. The Battalion Chief responsible for the East End crews, BFC 2, recorded a 19th ranked 2,062 runs in 2010. The Officers and Members of “The Heights” are extremely proud of the recognition from Firehouse Magazine for their long nights and proven dedication to the citizens of DC and thank them for the honor. 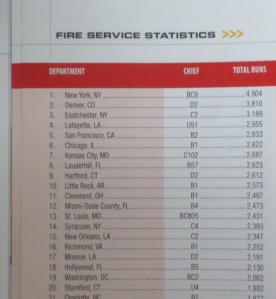 Posted in Other Things Fire Department